So hopefully by now you have read the first page and want to know more about this project.
At the beginning this project may seem daunting and full of areas that you are not sure about, but it is relatively straight forward, as soon as you start to understand the basics of how it all works and the shroud of mystery is revealed then I hope you will see that each step is very simple.
If you are good with your hands and possess some common sense then you should be fine, some basic plumbing & electrical skills would be good. If you are not sure then get a professional in, either way you should always get a professional to check your work.

The project can be broken down into 8 main areas which are: 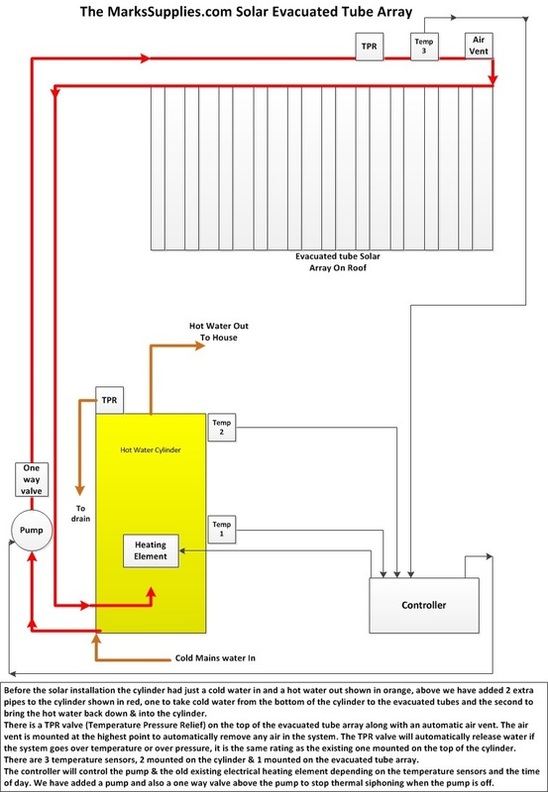 Designing your System
I will try to deal with these areas in order starting with the design. Each installation will be different, but the main things to look out for are the following:

Do you already have a hot water cylinder that uses electric to heat the water, if so then does it have extra ports on it for a solar installation? It's good news if you do because the extra ports will make the job more easier.
If you have a normal hot water cylinder just like me without extra solar ports then don't worry, you do not have to spend thousands replacing it, the details of how to connect to this type of cylinder will be documented in detail.
If you do not have a hot water cylinder then you may have a heater that heats up the water when you turn on the tap, these are sometimes called Infinity heaters in New Zealand & they are very good. If this is what you have & it works well then I would recommend sticking with it, a solar installation would be better but the pay back is going to be far less.
The bigger the cylinder the better, I have a 180 litre mains pressure cylinder for 3 of us, this will be ok but I would prefer a bigger one around 250 litres. The idea here is that you want to get all the heat from the sun all the time, so if you had a small cylinder then it may get up to temperature quick but it would also run out quickly. If it was up to temperature by midday then the heat from the rest of the day is wasted, plus the evacuated tubes will continue to heat up with no easy solution to cool them down. A bit like a nuclear power station that is prevented from pumping water to the core to cool it down, it just gets hotter & hotter until it blows. So if you had a small cylinder then you would need to reduce the amount of evacuated tubes before you have a nuclear meltdown haha, but this just means that it will take all day to heat your water which as we know will run out quickly if used. So bigger is better. It's worth mentioning here that our system will have over pressure & over temperature valves to prevent anything bad happening plus we will still have the ability to heat the water by conventional electric means if needed. If you require more hot water for more people then you will need a bigger storage cylinder & more evacuated tubes. Exactly how big & how many tubes is debatable but this should become apparent during the final testing phase of my own system.

Are you able to mount the frame on your roof facing north?
I should clarify here that if, like me in NZ,  you live south of the equator then the evacuated tube frame needs to face north, if you live north of the equator such as Europe & America then it will need to face South. And if you live on the equator then it will face vertically straight up.
You can of course mount your frame in other places besides the roof but it needs to be somewhere that is safe & away from people & above all it has to face towards the sun.
The outside of the glass evacuated tubes do not get hot but the copper heat pipe inside does, very hot, plus the glass tubes are strong enough to combat hale stones but they may not survive a football. So the roof does seem a good safe place, especially when you need it to collect the suns warmth all day so avoid areas that may get shade at some point during the day.
I have a flat roof so I can install mine directly north at any angle but you may not be that lucky, slightly either way of north will be ok but every compromise that you make will cost you heat. If you have a pitched roof that doesn't face north then you will need to think very hard as to whether you want to mount your frame at an angle to the roof as this may spoil the cosmetic look of your house plus it may catch the wind & also be difficult to work on.
The angle that the frame is installed at is also very critical, it should match your areas latitude, if you look at a map of the world then the equator separates the north & south poles or hemispheres. The equator is zero degrees latitude and the latitude goes from zero all the way to 90 when you reach one of the poles. So I've looked at my world wall map & it shows Auckland New Zealand as being between 35-40 degrees. I done a search on google & found that the exact angle is 37 degrees for Auckland new Zealand. London UK would be 51 & New York USA is 40 degrees.

Are you able to run two 15mm copper pipes from your cylinder to the frame? The pipes will definitely need insulating so allow for that. I can see that if we cut a hole in the roof for the pipes then that hole could always be a source of leaks & problems later so I personally do not want to cut any holes in my roof. I will be running my pipes outside & down the wall, a compromise would be to have the pipes coming out under the eaves so they come out of your wall but under the overhang of the roof. Again which ever way you do it it has to look good afterwards.

I think by now I've covered the main areas that would prevent your project from succeeding. But there are still other things that need to be considered, the first is how to get the hot solar water down to your cylinder. By using a pump would seem obvious but if your frame could be mounted below your cylinder then the hot water would naturally rise to the cylinder & you wouldn't need a pump, this is called thermal siphoning & is a great way to design your system because you do not need a pump or a control system to monitor everything. This would be an ideal situation however it is not normal. Almost all houses including mine have their hot water cylinder on the ground floor or basement & have no where other than the roof to mount their frame. So we are back to a pump, I have seen that some DIY installs have used a solar panel powered pump, this would also seem ideal, the pump would only pump when it is sunny & pump slower when cloudy which is exactly what you want. But after more searching on the internet it seems that this can be problematic, the small 12 or 24v pumps may not last very long especially with the high water temperatures plus the solar panels can deteriorate over time providing less power & even a few leaves or bird droppings can make a difference. I still thought a solar powered pump could be good especially during a power outage but I could see other flaws, in the morning the pump would start as soon as the sun came up but before the water was hot enough so in theory you would be pumping cold water down to your cylinder & in the evening it could pump luke warm water down to a cylinder full of hot water. So although I still like the idea of a solar pump, I will be using a mains powered pump that is designed for circulating hot water continuously with no maintenance, see the Day 1 page for more pump info. These pumps are expensive so I will be looking at getting a good second hand bronze bodied one plus they are designed to use very little power, the Grunfos pump I chose draws 0.15 Amps which is approx 35 Watts. Compared to a 60 Watt light bulb then that's fairly good. Although you should all be using low power bulbs by now which are around 10-25W.
If you like our site then please click on the Facebook icon at the top right of this page, thank you.
For more information you can email us via our Contact Us page.