I have a mains pressure 180 litre cylinder with a connection at the top for the hot water output and a connection at the bottom for the incoming cold mains water. The water is heated by an electrical element, sometimes called an immersion heater, this has it's own thermostat & works well but it costs a small fortune to run.
I would say that this is a typical setup, especially for New Zealand.

So the first problem is how to connect our 2 solar hot water pipes to this old cylinder.

The answer is surprisingly easy but hard to explain so I'm going to add a few pics to help out. 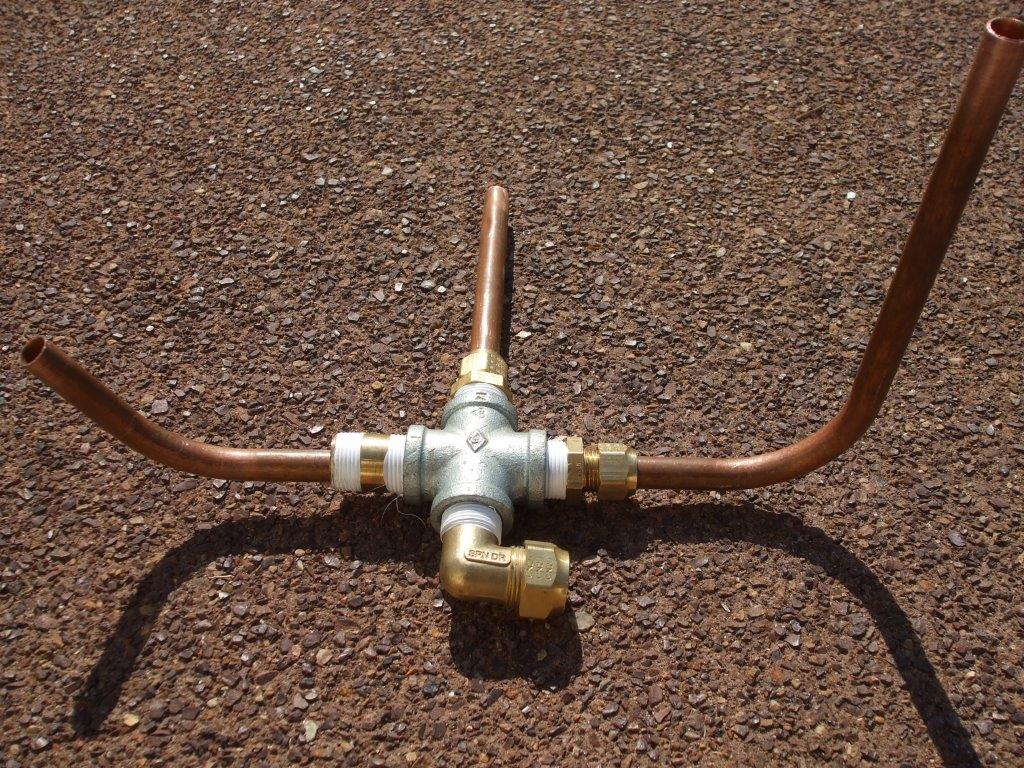 Here is that 4 port valve, in the same orientation as it was fitted above. All 4 ports of the valve are 20mm, but 2 of them have 20-15mm reducers fitted & it is only the nearest one that remains at 20mm for the mains water connection & the left hand one for the cylinder connection. The main thing with this is that the 15mm pipe on the right goes all the way through the 4 port valve & out the 20mm cylinder connection side on the left & into the cylinder where it has been slightly bent upwards. So the left port is 20mm but the copper pipe is 15mm, this is how we can get the extra connection to the cylinder by only using the one hole.
The 4 port valve above is actually called a 4 port solar conversion transfer valve, you can buy one especially made for this job or you can buy the parts above & make your own which would save at least $100. I made the one above for around $30 without the pipe.
When I made mine I had to insert the pipe through the 4 port valve before I bent both ends. The copper pipe end that goes into the cylinder is for bringing the hot solar water down from the roof, it is bent upwards so that it deposits the hot water slightly higher than the much colder water at the bottom of the cylinder. But be careful how long & at what angle you use as it could hit the electrical element inside the cylinder.

All the connections into the port & into the cylinder will need PTFE tape (the white stuff in the pic above) to be wound onto the threads to stop leaks, I generally put approx 12 turns of tape onto each joint in such a way that it doesn't want to unravel when you screw the fitting in. When connecting the copper pipes to the brass fittings you will need to add an olive underneath the brass nut as well as adding a little plumbers putty around both sides of the olive. I've added a picture below left to show the olive between the fitting & the nut (called a crox nut). It is possible to use a tool to create a ridge in the copper pipe & use this ridge instead of an olive, the tool is called a crox tool & if you have one then you probably know how to use it but olives are cheap & good for beginners.

One last thing to mention is that if you touch old fittings or valves in any way then they may leak afterwards, it's just something you have to get used to when plumbing. You will probably use some sort of valve to turn the cold water off & another valve to drain your cylinder & you may also loosen or remove the hot water output pipe at the top of the cylinder to allow air inside the cylinder when draining it. All or some of these valves or joints may leak afterwards, just be prepared for this & start the work in the morning to give yourself time to fix or replace them. Never leave a connection with a leak, it doesn't matter how small the leak is it must be fixed, that one small drip now will cause floor boards to rot later. I almost forgot, do I really need to mention that you have to turn your electrical heating element off before you drain the cylinder, probably not but don't forget.
If you like our site then please click on the Facebook icon at the top right of this page, thank you.
For more information you can email us via our Contact Us page.